On June 10, 2022, the ceremonial opening of the central operating theatres and central sterilization of the hospital Nemocnice České Budějovice, a.s., took place - a project that is currently unparalleled in Europe in terms of state-of-the-art technology. The total investment in these new premises reached the amount of CZK 1.15 billion, and from the beginning it was a clear vision to equip the workplaces with the best equipment that the current market offers. We can therefore be proud that our devices and technologies were chosen for the required equipment.

The implementation of the project was carried out between November 2019 and May 2022 by the association of the companies OHLA ŽS and Metrostav and was primarily intended to solve the construction of new premises for intensive and operative medicine following the emergency department.

The České Budějovice Hospital thus built the largest project in its history after 29 long years. This first stage of extensions and renovations of the CH pavilion included the construction of, among other things, 12 new operating theatres for the fields of traumatology, neurosurgery, urology, gynaecology, orthopaedics, plastic surgery, ORL, the eye department and Central Sterilization (CS). Central warehouses for operating rooms, post-operative recovery rooms of the intensive care unit, standard bed stations, space for a new magnetic resonance imaging and technology of the entire building were also built.

The Central Operating Theatres and Central Sterilization became the first such extensive workplace in the Czech Republic and surpassed in scope even large university hospitals not only in Prague, but also throughout the country. The Central Sterilization department will ensure complete preparation of tools, material and other medical aids for 30 operating theatres and all departments of the hospital.

Hospitals in Germany, Switzerland, Italy and Austria were the model for this extensive project. CS operation will be provided 24 hours a day, 7 days a week. It will process over 100,000 tools.

From the technical point of view, this project in the CS department  is characterized by several unique features, thanks to which the hospital stands out from the rest of the medical facilities on the Czech market.

The hospital thus has priority in ensuring the marking of surgical instruments. It concerns the use of RFID chips. These chips were applied to both new and existing instrumentation. This system is operationally simpler, it greatly facilitates the work of the staff and ensures safe, functional and simple management of instruments, i.e. a way of monitoring the circulation of surgical instruments. 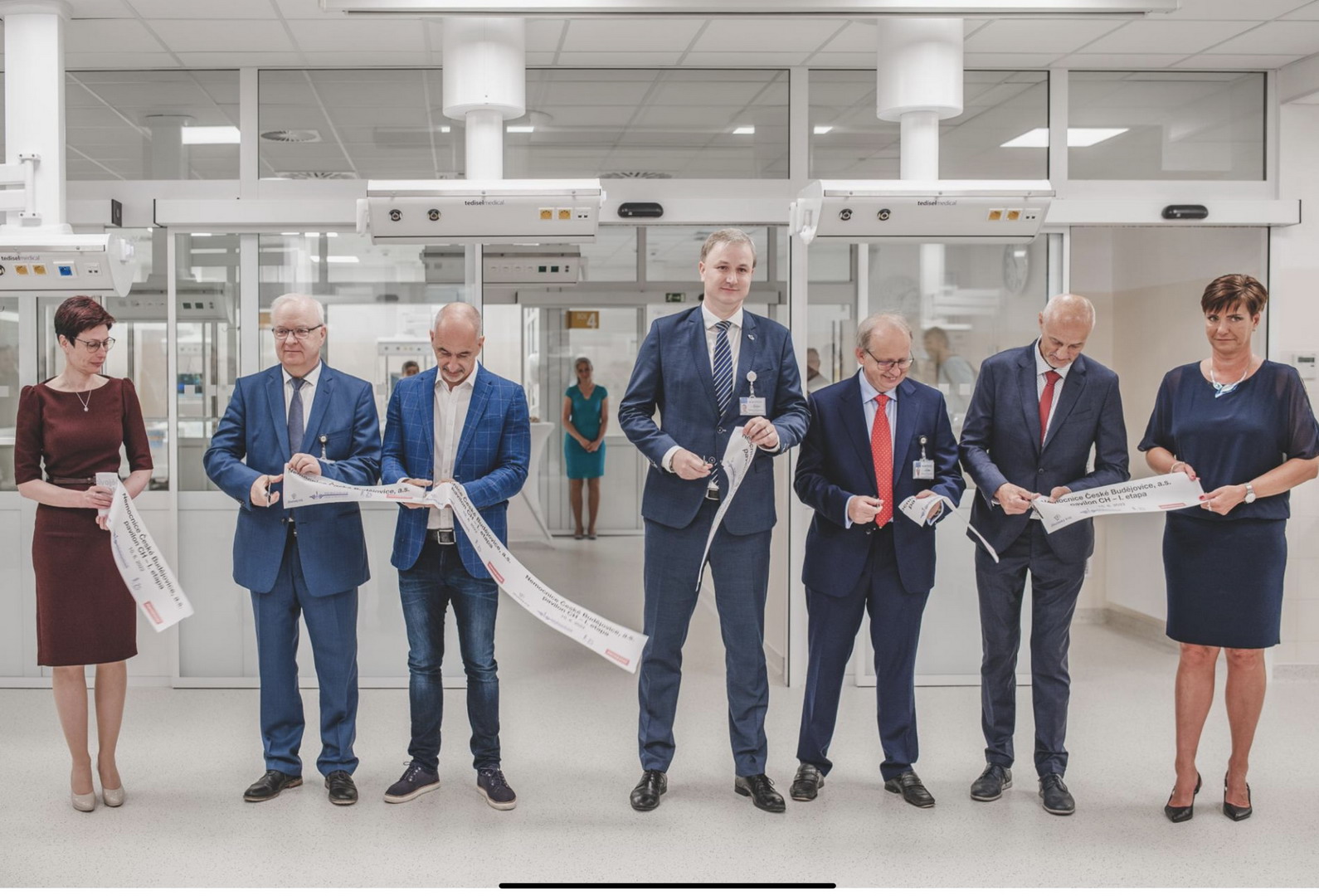 The electronic Bowie&Dick test under the trade name "Steam Spy" is now also used on steam sterilizers. The advantages of the integrated non-chemical alternative to the Bowie&Dick test are that the test result is listed directly on the batch documentation protocol and is available immediately after the process is finished.

The advantage is that an automatic morning warm-up cycle such as a vacuum test and heating together with the Bowie&Dick / Steam Spy test program can be carried out unattended.
The unique feature of the CS workplace equipment is also the first installation of the RUMED360 software system in the Czech Republic. Two modules of this modular system are installed in České Budějovice. The Simserv module, which collects data from the devices, then generates and prints output protocols in PDF format for the needs of the CS operator and forwards them to the hospital information system for processing in the form of XML output.

The second module is the Dashboard, which displays information about the devices on two large-screen TVs in the Central Sterilization preparation room, so that the operator has an overview of the running programs and the remaining time until the end of the cycle.

The first plasma sterilizer HYPER LTS 150-2 from MMM Group was installed in the Czech Republic for central sterilization.

For the first time in the Czech Republic, bar code readers are also being installed for all washing disinfectors and sterilizers, ensuring monitoring of instrument circulation.

As the second workplace in the Czech Republic, the hospital has also installed a central dosing system from the company Dr. Weigert for washing and disinfecting products for all washing disinfectors. Instead of canisters with washing and disinfecting preparations, there are reservoirs in the service area of ​​the washers, into which the central dosing system automatically pumps preparations from 200 l drums.
These casks, together with robust diaphragm pumps and the control unit, are located in a separate warehouse. Deliveries of detergents and disinfectants in large-volume packages are more economical for the customer and, due to the production of smaller quantities of packaging, also more ecological. At the same time, the user does not have to change canisters in dishwashers, and thus completely eliminates the risk of splashing when handling canisters, as well as the risk of confusing canisters. 200 l barrels are normally delivered in 2 pcs on a wooden pallet.

Handling heavy pallets and the subsequent transfer of full casks from the pallet to the warehouse would be uncomfortable for the Central Sterilization department staff, so we offered the hospital an innovative solution, which is also implemented for the first time in the Czech Republic. Based on the recommendation of the company Dr. Weigert we approached the Dutch manufacturer and bought from him 8 special containers on wheels, which are intended for the transport of 200 l barrels, certified and perform the function of a catch basin in case of damage to the cask. We will supply the hospital with washing and disinfecting products in these containers.

During the implementation of this project, it was necessary to solve a lot of new non-standard requirements of the client. It was time-demanding for the entire MMM team. A few examples just to give you an idea:

"In addition to the construction of 12 operating theatres with complete facilities, Central Sterilization and central warehouses for operating theatres, this first stage of additions and renovations of the CH pavilion includes the construction of a post-op room, an intensive care unit, four standard inpatient stations, a space for a new magnetic resonance imaging or for the technologies of the entire facility. In the forthcoming weeks, we will refurbish the premises in such a way that, after trial operation, the first patients can be operated on here from this September."

The following items were installed in total at Central Sterilization:

Our delivery of technology, including accessories, was realized in the order of several tens of millions of Czech crowns.

We do believe that the above mentioned event will be a new milestone in the construction of new CS workplaces on the Czech market with MMM devices and will serve for a long time as a model and unique workplace for other hospitals.