Home >About Us >News - Archive >Another successful participation in PITTCON

Another successful participation in PITTCON

Pittcon is the traditionally greatest laboratory technique exhibition in the United States, encompassing the whole North and South America. This year, the exhibition was held on 14 – 18 March, 2011 in Atlanta, Georgia. This year was important because it showed objectively the American market situation after 2009-2010, the years of crisis. The exhibition was participated by 979 exhibiting companies from all over the world and visited by 17,098 visitors, out of which 25 % were out of the USA. Our exhibition under the name of BMT USA was visited by more than 60 partners and distributors. Some part of them came from the USA but about 30% were from other countries like Columbia or Mexico. We had discussions with our stable partners from Egypt, Singapore, United Kingdom, and Argentina but we have also got contacts to other partners in Nigeria, Guatemala, Puerto Rico, Panama, Chile, Peru etc. Our colleagues from the Seattle branch prepared an unusual marketing tool as an attraction. They prepared fresh dough each morning and during the day, we baked the US popular cookies in the exhibited Venticell 55. The delicious smell wafted the whole hall and tempted a number of end users and distributors to visit our stand. The positive reaction of both our existing partners and new contacts has confirmed that the US market as well as the market in many South America countries like Peru or Columbia has overcome the negative impacts of the economic crisis and the American markets have been developing in a speed reaching almost the one before the crisis, which promises interesting results of our MMM/BMT Group devices. 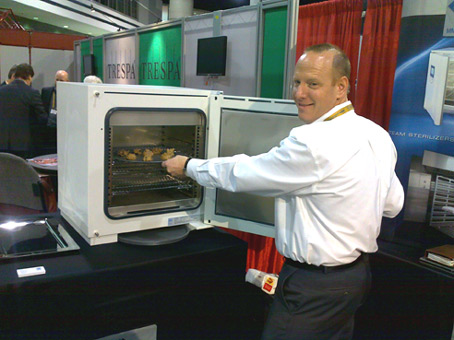