ArabLab 2011, the greatest Near- and Middle East exhibition of laboratory technology, was held on 7–10 March, 2011 in Dubai (United Arab Emirates). We took part there this year for the first time with our own heat technology stand under the name of the subsidiary company MMM Medcenter. We exhibited Incucell 55 and Venticell 55 lent from our exclusive distributor in Dubai. In addition to it, we also exhibited BMT-MMM sterilization technique in form of a large-size promotional panel. The exhibition is very popular both in distributors and end users from Africa and the Persian Gulf countries. Despite of unrest in Arabian countries, we gave a warm welcome in our small stand (9 m2) to more than 130 potential customers, out of which 110 came from other countries than the United Arab Emirates. Most of them came from Saudi Arabia, Iran, Pakistan, and Syria. We were also visited by potential customers from India, Kuwait, Iraq, Oman, Morocco, Kenya, Nigeria, and many others. Our exhibition was well-attended and the exhibited products attracted deserved attention. In addition to people interested in heat technology, we have obtained several valuable sterilization contacts as well. Despite of the difficult situation in the Arabian countries, it seems to us we have started another successful period for BMT-MMM heat and sterilization technique at the Near- and Middle East. 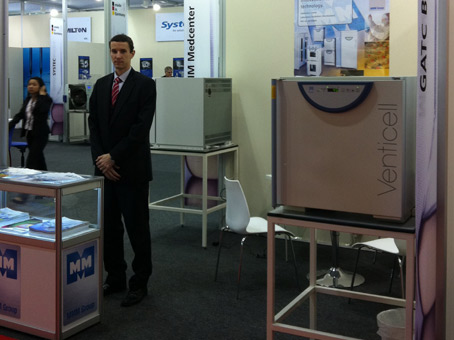